﻿Main > North > Chiang Mai > What are some delicious north foods
﻿

What are some delicious north foods (View 2226 Time) Rating: 4.5/5 (2 votes)
What are some delicious north foods north food local food It is a popular food. Many great menus from the north You are in the middle of the valley where the weather is cool. Served with many different types of dipping sauces, pungent flavor, eaten with warm sticky rice. North food has been influenced by the Lanna kingdom. and Northeast until it was praised and dubbed as Lan Na rice. The difference between northern food And Isan food is the taste of northern food. It is not hot like Isan people. It has a milder, salty and sour taste, but not sweet. Famous dishes include Khao Soi, Hang Lay Curry and Sai Oua.
Vegetables commonly used in cooking are kae, bon, yak kluai, and sweet vegetables. Northern cuisine is unique in that it combines the cultural mix of various ethnic groups such as Chinese Hor, Tai Lue, Thai Yai, and indigenous peoples. There are many methods of cooking, such as curry, stirring, screening, frying, spinning, piping, boiling, and lowering. Northern food is often cooked very much, such as stir-fried vegetables. Often stir-fried until the vegetables are soft. Khantoke in the north is a charming, unique, delicious recipe, along with local vegetables. These usually consist of Kaeng Kae, Hang Lei, Kaeng Ho, Kanom Jeen Nam Ngiao, and Khao Soi, among others.
North foods Due to the relatively cold climate, most of the northern dishes are very fatty, such as Gang Hung Lay, Nam Prik Ong and Sai Oua. These northern dishes were invented by northern people's wisdom. To help the body to be warm to withstand the cold climate. 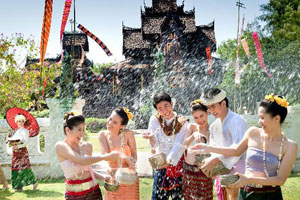 Northern tradition and northern culture Born from a combination of lifestyle and religion, it is unique and varies according to the season. There are festivals held every month such as Songkran Tradition, Wan Nao, Wan Ya Wan, Nang Maeo Parade, Poi Noi Tradition, Kaew Luk Ordination Tradition, Poi Luang Tradition, Yi Peng Tradition, Lantern Festival Tradition, Tan Tung Tradition. and the tradition of lottery cones, etc.
Food of the north Contains glutinous rice as a staple food. There are different types of chili pastes such as Nam Prik Num, Nam Prik Ong. There are many types of curry such as Kaeng Ho, Kaeng Kae. There are also Nham, Sai Oua, Pork Kham and various vegetables. The weather also plays an important role that makes the northern food different from other regions. The cold weather is the reason most foods are high in fat, such as Nam Prik Ong, Hung Lay Curry, and Sai Oua to help keep the body warm. In addition, living in valleys and highlands near forests.
Plants in the forest to cook food such as vegetables, kae bon, yak kluai, sweet vegetables, resulting in local dishes. Various names such as Kaeng Khae, Kaeng Yaek Kluai, and Kaeng Bon.
North Food Or, there are many types of Lanna food. Some dishes have a long history. There are useful local vegetables as a component. It has unique eating characteristics, so it is popular to bring vegetation in the forest to cook food, such as cabbage, banana leaf, banana leaf, sweet vegetable, resulting in local food names such as Kaeng Kae, Kaeng Kluai Kluai, Kaeng Bon, Northern food, another interesting food region. The menu is quite diverse, whether it's curry, chili paste or spicy salad. The type of food is similar to other regions. But northern food has a distinctive taste. For example, some vegetables are easy to find only in the north. Because the North is full of mountains, there are many vegetables and herbs from the forest. Therefore, the curry paste contains only various herbs.
Delicious North Food There are many and have different names from every region. We have compiled many recipes. A variety of menus, whether boiled menus, stir-fry menus, curry menus, fried menus, steamed menus, grilled menus, try to cook and eat. Northern food. How to make it delicious. Northern food. What secrets do you have?
Characteristics of northern food As for the uniqueness of northern food, northern food is not popular with sugar. The sweetness of the food is obtained from the ingredients used in cooking, whether it is vegetables, fish, fats are obtained from animal oils, etc. Northern folk food. It is special that there is a mix of eating cultures from many peoples. 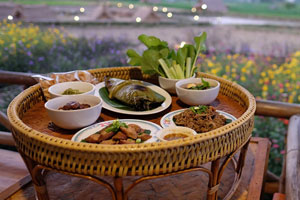 North traditional food Nort Thailand In the past, it was part of the Lanna Kingdom. It is a kingdom that is prosperous. The territory extends to neighboring countries such as Myanmar and Laos. Food of the Lanna people. therefore received a variety of cultures from many different tribes.Thai traditional food So there are many
Food of the north That will eat sticky rice as the main food and eat with chili paste such as Nam Prik Num, Nam Prik Ong and many kinds of curry such as Kaeng Ho, Kaeng Kae, etc. With the weather of the north, the weather is cool. Therefore, it is different from other regions of Thailand. Most of the northern people's food contains a lot of fat, such as Nam Prik Ong, Hung Lay Curry, and Sausages, which help warm the body. Wild plants that are often used in cooking in the North, such as cabbage, cabbage, banana leaf, sweet vegetables, etc.
North people eat sticky rice as a staple food. Northern Thai Cuisine Northern region is a land that has prospered since the past as a land of history. cultural arts tradition.
In the past, the northern region of Thailand was part of the Lanna Kingdom. During this kingdom's power Has spread the territory into neighboring countries such as Myanmar, Laos, and people from different territories migrated to settle in this land. therefore receiving a variety of cultures from different peoples into their daily lives, including food with the food of the North Contains glutinous rice as a staple food.
There are different types of chili pastes such as Nam Prik Num, Nam Prik Ong, there are many types of curry such as Kaeng Ho, Kaeng Khae. There are also Nham, Sai Oua, Pork Kham and various vegetables. The weather also plays an important role that makes the northern food different from other regions. The cold weather is the reason most foods are high in fat, such as Nam Prik Ong, Hung Lay Curry, and Sai Oua to help keep the body warm. In addition, living in the valleys and highlands near the forest, therefore popularly used plants in the forest to cook, such as vegetables, cabbage, bell peppers, sweet vegetables, resulting in local food names such as Kaeng Kae, Kaeng Yaek Kluai, and Kaeng Bon.
Local Thai food in the North 9 dishes that are distinctive and delicious. While not as well known to foreigners as Tom Yum Goong or Massaman, these “northern dishes” are worth a try. The results of the survey are by Austin Bush (Austin Bush), photographer and writer. who have been to experience the deliciousness of northern food in thailand.

1. Khao Soi Khao Soi is a curry that resembles a green curry. is a kind of coconut milk curry But it comes in the form of noodles. It is often cooked with beef or chicken as the main ingredient. Served with pickles It is a popular food of northern people. 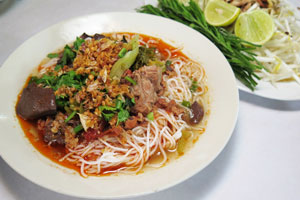 2. Khanom Jeen Nam Ngeo It is a Chinese dessert that is eaten with a liquid called Nam Ngiao. It is one of the northern curries. The main ingredients are pork ribs, curry made from dried northern chilies, tomatoes, and pork blood cooked in a home-style way. You can smell the authentic local food. according to the original recipe of Aunt Boonsri Lampang residents. 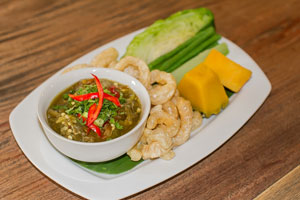 3. Nam Prik Num This menu is northern Thai food called Nam Prik (Dip) made from chili, shallots, garlic, all grilled over a flame until fragrant. Before pounding it is a local chili paste. It is often eaten with boiled vegetables and steamed glutinous rice. Which is considered a very healthy food. But if it's more delicious Must eat with fried chicken joints Let me tell you that it's delicious and fun. I don't care about calories at all. 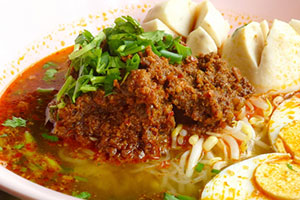 4. Khao Soi Nam Na This menu is a kind of Khao Soi. The difference with general Khao Soi is that Khao Soi Nam Na is not a coconut milk curry, no curry paste, but a clear noodle soup. Topped with minced pork simmered with fermented soybeans and dried chili (Northern people call it Jin Kua. It's roasted pork with curry paste and rotten beans.) 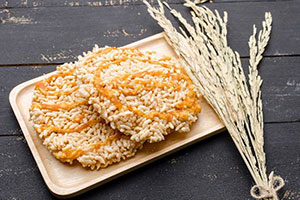 5. Khao Tan This menu tastes very interesting. It is a round shaped snack. Made from glutinous rice mixed with sugar, salt, sesame and watermelon juice, then dried. and then fried until crispy Finished off by pouring cane sugar on top of the dessert. 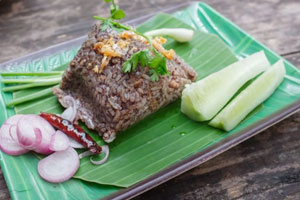 6. Kan Jin Rice This menu is cooked rice, minced pork, pork blood, sprinkled with fried garlic oil. They are wrapped together in banana leaves and steamed until cooked. which young Austin admits “Bringing blood to cook is a strange thing and makes foreigners feel terrified. But if you don't say that this menu put blood into it I wouldn't know Because the taste that I tried was spicy, onion and garlic and very delicious.” 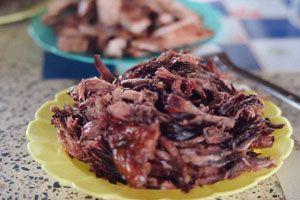 7. Jin Tup This menu is pounded beef or pounded beef. It is made from beef marinated with fish sauce, spices and salt, then grilled over a charcoal fire until cooked and dry, then pounded hard. until I heard the sound of thump.. thump.. is the origin of the name Jintub. 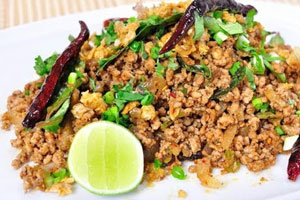 8. Larb Moo Roasted while in the Northeastern region of Thailand There is a delicious menu such as Larb Isan, which has a variety of herbs, has a sour taste, has a distinctive aroma from roasted rice. This Isaan Laab dish is very popular with today's American foodies. But when you come to try Laab Muang or Laab dishes of the North. You'll know it's completely different. 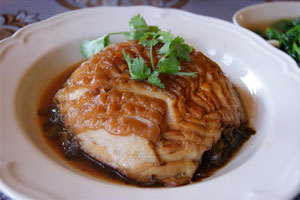 9. Millennial pork This menu is a collection of Pork belly, pickles and oolong tea leaves are stacked on top of each other and steamed for four hours, a menu influenced by Chinese immigrants. who live in the northern region of Thailand
North food there are 9 northern dishes that are most commonly eaten by northern people. Food culture that communicates with beauty through the habits of northern people with delicate verbs. Picky about food Taken out to be the most valuable and unique food.

Other religious and spiritural sites(17)

Other religious and spiritural sites(17)